Is Social Media Marketing Really All That Important?

Most small to medium business owners are very busy people. Running a business takes 110% effort, especially in the first few years. As a result, many of our customers ask, “Is it really that important that I be on social media?” Well, why don’t you be the judge… 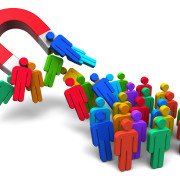 Social Media Marketing has the potential (when used properly) to drive a substantial number of potential customers to your website. Social media is without question the busiest marketplace of potential clients who are engaged and tuning in on a regular basis.

Get Started Now!
Scroll to top